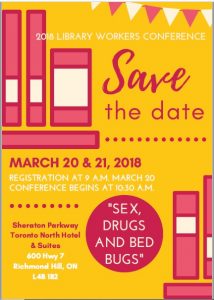 The 2018 Library Workers Conference will be held on March 20 and 21 at Richmond Hill, ON. This year’s theme is Sex, Drugs and Bed Bugs.
Usually, the Executive Committee members attend the conference but this year we would like to extend an invitation to the general membership.
What happens in this conference?
The conference is attended by representatives from various CUPE Library Locals – public and academic. During the conference, aside from the keynote speakers, each local shares the highlights for their system from the previous year — this could range from stories about their contract negotiations to scheduling issues in their system. Attendees share best practices and you end up getting to know people from other systems. They eventually become valuable resources not just for Union matters but also for daily tasks we have in the workplace.
If you’ve attended general membership meetings last year and would like to be more involved in the union, attending this conference is a great first step to get an idea of what kind of commitment and work being involved entails.
If you’re interested or have questions, please email Jennie via   jehamilt932@gmail.com before Feb 22.